The days and weeks after October 11, 2015 were some of the most intense in our by now decades long search to unravel the mysteries of my Dad’s family.  The second cousin who contacted me that day turned out to be a treasure trove of information on the Tetenbaums, though she knew little about my Grandmother or (as I posted before) Sarah Crangle, ironically one of the Tetenbaums we had the most information on.  But her documentation of the rest of the family can only be described as astoundingly detailed.

Four months passed, and then another bombshell was delivered via Wikitree’s messaging system:

Jeffrey, My name is [redacted for privacy]. I am a direct descendant of Annie Orloff (nee Tetenbaum) whose older sister was Edith Kauffman (nee Tetenbaum). From your posting, it looks as though you have some history about Edith’s and Annie’s parents. I have their names as Chaim and Rachael, although I noticed that you have the mother’s name as Golda. You also mention a brother named Baruch/Barnet and I am also aware of a younger sister named Kate. Assuming that you are related to Edith, we would definitely be distant cousins. Would you be able to shed more light into this. I would be quite grateful to share whatever information I have. Regards

Now those of you who have been paying attention will of course know I am not descended from Edith, but Kate, and my correspondent soon realized his mistake, at which point the story gets really interesting.  Once we sorted out who was whom and how we were related, this gentleman (probably not realizing the import of what he was sharing with me) stated quite simply in an email “I think I know what happened to the missing Kauffman baby.”  I’m not ashamed to admit I had tears well up in my eyes.  Reading the foster care records that stated my Dad and my Uncle Charlie had searched for this baby for years to no avail had instilled in me what I’ve compared to a “military mission” of sorts (appropriate, I guess, given my Dad’s and Charlie’s backgrounds), and it seemed finally that this particular mission was about to be accomplished.

While he had to consult his mother (thankfully still living) for details, he was able to provide what he thought was the married name of a woman who had been raised by Annie Orloff after her little sister Kate died giving birth to her.  He provided a picture of the woman at a family gathering in the early fifties, and the resemblance between her and my sister Kathie was pretty remarkable: 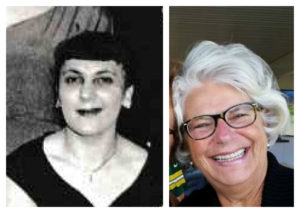 As I’ve also mentioned in a previous post, genealogy research tends to hone one’s search engine skills, and once I had this woman’s married name, I began madly Googling her, at which point one of the most serendipitous occurrences in this entire tale unfolded.  The woman had grown up being called Dolly, and that (along with the surname I was given) was what I searched for.  Rather incredibly, I stumbled across an obituary which had just been posted a few days earlier for a man named Louis (with the same surname).  This gentleman was identified as “beloved husband of the late Katharine (Dolly).”