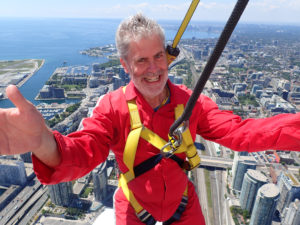 Jeffrey Michael Kauffman has amassed diverse credits in both music and writing/journalism careers over several decades.  In the music world, Portland, Oregon critics have called Jeff’s original jazz “glorious, captivating, intriguing, and exotic.” Theater reviewers have praised his Music Direction as “extremely tight, with drive and balance.”  Unwilling to be pigeonholed as a jazz, pop, rock, classical or theater music artist, Jeff has forged a long and successful career based in Portland, but with a worldwide reach, as that rare breed of musician who, in the words of another reviewer, “does it all, and does it all with panache and grace.”

Among Jeff’s many notable musical achievements:  national composing grants from, among others, the National Endowment for the Arts, Lila Wallace/Reader’s Digest Fund, Pew Charitable Trusts and Nautilus Music Theater; commissions/fellowships to create music in such varied genres as free jazz (for Portland’s Art in Public Spaces series) and opera (for the Resident Artists of Portland Opera); long term house pianist at several popular lounges and clubs; decades as featured artist and special material writer aboard cruise ships; numerous Music Directing and original underscoring credits for many of Portland’s major and alternative theater companies; numerous television performing credits; television soundtracks, including Portland’s first-ever CableACE nominated production; choral arranging and conducting for a wide variety of both religious and secular groups; and frequent music direction and special material writing for nationally known theater and cabaret artists, including Susannah Mars, Michele Mariana, and Broadway’s Tony nominated Brooks Ashmanskas as well as Tony winning Corey Brunish.  Jeff was winner of the OTAS Award for Musical Direction for his conducting of Lakewood Theater’s The Producers, the most successful show in the over half century history of that theater company.

JazzScene has raved about Jeff’s “encyclopedic knowledge of American popular song.”  Whether playing and singing Gershwin or Sting, Porter or Duncan Sheik, Jeff’s repertoire has delighted audiences for decades.

Jeff’s vocal jazz group Aqabala won Jazziz Magazine’s International Vocals on Fire Contest, being deemed one of the “Voices of the New Jazz Culture,” and was featured in the magazine and on its accompanying CD, affording Jeff an international audience for his challenging song Wasn’t It Spring Yesterday? (Mizmor L’Shekinah), a piece which combines pop, jazz and classical idioms as well as Hebrew chant.  Upon hearing this song, the late legendary multiple Oscar-winning songwriter Ray Evans wrote a personal note to Jeff stating, “I admire the musicianship, writing and performance.  I could not write the poetic lyric you have.”

Among the many renowned composers, performers and educators with whom Jeff has studied in his undergraduate and post-graduate career are Vladimir Ussachevsky, Roy Harris, Joe Henderson, Jacques Loussier, Billy Taylor, Bruce Reich, Henry Wolking, and David Schiff.

As a writer, Jeff has worked for several well regarded papers, magazines and websites. He is especially well known in film and theater circles for articles in such magazines as The Sondheim Review and for decades of film criticism and film historical research for papers like The Daily Utah Chronicle and websites like Blu-ray.com. Jeff’s exposé of misinformation disseminated about classic film and Broadway actress Frances Farmer has been utilized by multiple major international media outlets, including A&E and NPR, and there are scores of magazine and newspaper articles throughout the world covering Jeff’s groundbreaking research and reportage about Farmer.

Jeff is married to popular comedian Betsy Semon Kauffman, and father to sons Gabriel and Zachary.