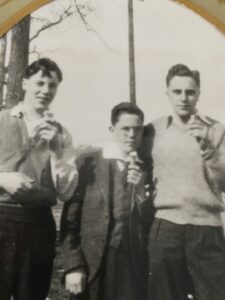 Some of you may have noticed that in my first post I neglected to mention what ultimately happened to my late Aunt Kay as I was documenting the triumphs and tragedies of the Kauffman males.  Kay reportedly had the rockiest stay in foster care, and unfortunately she committed suicide when she was in her 20s or 30s, long before I was born.  However, she plays into this story in a kind of unusual way.  Looking back on it now, we probably should have figured stuff out a lot sooner than we did, but we had always been told that our grandmother Kate died giving birth to Kay.  Since we had absolutely no data to go by until years later (in terms of paper documentation and the like), there was no reason to really even think anything else might have happened, but indeed it had happened.

After I jumped through a few hoops with the Jewish Child Care Agency, I received a packet of information from them about the Kauffmans’ stay in foster care which completely upended at least some of what we had been led to believe.  First of all, there were microfiche copies of various intake forms, something that gave us at least one more relative name (a Fishkin family in London).  But more importantly, there was a narrative put together by Leona Ferrer which sought to redact years of social worker notes on my Dad and his siblings.  The most amazing thing that the intake documents and the narrative revealed is that our grandmother Kate had died giving birth not to Kay, but to another little girl whom our grandfather Jacob had named Catherine (again, this odd recurrence of one name).  It was a mind blowing revelation, but one that seemed to be a dead end since the intake documents stated Jacob had put the baby up for adoption in Yonkers.  Heartbreakingly, Ms. Ferrer’s narrative detailed that my Dad and his next youngest brother Charlie, would would have been 8 and 6 when their mother died, spent years trying to find the baby to no avail.

There were several other interesting facts alluded to in the documentation, including that Jacob worked regularly in Canada (remember all the kids after my Dad had been born in Rutland, Vermont), and that he in fact returned several times after dropping them off at what was then the Hebrew Sheltering Guardian Society or (in disguise, an odd aside) at the foster homes the kids were staying in.  In fact the single most heartbreaking anecdote in the narrative was a recounting of one of Jacob’s visits, where he for one reason or another was only able to see Charlie, leading to some emotional trauma for my father.  Those of you who knew my Dad will understand how unusual and moving it was for me to read about my Dad in emotional distress, since he was about the most even keeled and emotionally well balanced man I’ve ever known, especially considering what he went through not just in his childhood but later in World War II.

One way or the other, though, we finally had a few answers, if even more questions.  This all happened circa 2002, and considering the fact that my grandmother died giving birth to a girl in 1922, it was easy to think there might be another Kauffman out there pushing 80 or so, though it seemed like there was absolutely no way to find her.