10. The guy we all followed 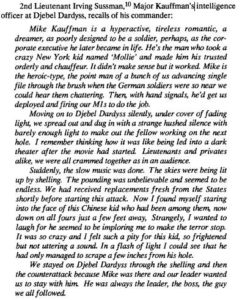 I haven’t yet gotten into my father’s amazing military career, but take just a moment to read this beautifully written, indeed virtually poetic, description of him by one of his World War II men: ==>

Anyone wanting to know why I understandably idolized my Dad as a little boy but became more and more aware of what an incredible man he was as I matured into being a man myself need only read this amazing tribute, one which speaks to my Dad’s bravery, his innate leadership skills and, not so coincidentally, his capacity to dream–big.  One of my Dad’s biggest dreams, albeit one he kept resolutely to himself, was to find his long lost family, as is recounted in some of the histories written about him, not just in the foster care records I quoted where it was stated he searched for his missing little sister for years, but in several accounts of his World War II adventures, where it’s specifically mentioned that on a brief leave in England as he was preparing for the D-Day “festivities,” he evidently journeyed north to his birthplace of Newcastle to search, a search which sadly paid no dividends.  Years later when he was visiting my sister Kathie in England, where she was living at the time, he mentioned again he wanted to go to Newcastle, but when Kathie said she wanted to tag along, he suddenly demurred.  This was a private dream, or so he thought, unaware of how his feelings had been passed, almost via osmosis, to his children.

It’s kind of funny in a way that several decades of searching has been able to be “reduced” to a few relatively brief blog posts, but I wanted this record to stand first as an overview, but also as a fairly readable summary for others who have been on a quest similar to ours and who may have given up hope.  As one of my favorite songwriters, Laura Nyro, posited years ago, “Nothing heals like time and love,” and those on genealogical journeys, especially for lost family, must deal in copious amounts of both time and love in order to hopefully ultimately find healing.

This is all to say that after the second message I received via Wikitree pointed the way to a potential answer about the missing Kauffman baby, I of course set off to contact her family, since the remembrance of her husband, whose obituary I found in an amazing bit of serendipity, mentioned children, who would of course be first cousins to my sisters and me.  It was not an easy task, as the universe or whoever/whatever arranges such things put up a series of obstacles to make that connection seemingly as difficult as possible.  Suffice it to say that just when I had given up hope, I heard from a relative of the recently passed gentleman who finally put me in touch with the surviving daughter of the woman we strongly suspected was “baby Catherine” (as our foster care records stated her name).

I won’t attempt to divine what went through other people’s minds and hearts, but can only state that there was a certain amount of probably understandable skepticism, even with the mass of data points that had accrued by this point.  We finally got proof of our relationship, though, and aside from the amazing fact that we suddenly had a first cousin to meet, there were numerous other second cousins in Toronto as well, all seemingly as excited as we were to connect.  Kathie and I instinctively knew what our vacation plans for summer 2016 needed to involve.

I’ll post about the family reunion next, which was truly amazing (and which continues to this day), but I’d like to close with a personal message to my dear, departed father, zikhrono livrakha, whom I think about virtually daily:  I followed you, Dad, and I hope you’re proud of where we all ended up.