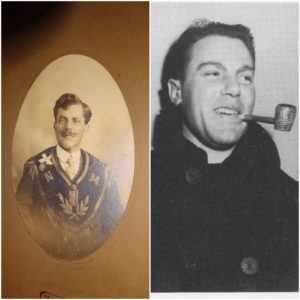 Here are a couple of fun Kauffman facts:  all of the Kauffman men in my Dad’s generation (meaning him and his two brothers) were left handed.  That trait was passed down to me, with an added odd piece of trivia:  my birthday is October 6, and both my mother’s middle sister Betty as well as the husband of my mother’s youngest sister Joanna were also born on October 6, and both of them were left handed as well.  For years it was a running Kauffman joke that whenever we’d meet someone born on October 6, we’d ask them if they were left handed, and statistics being what they are, almost all of them would answer, “No,” at which point we’d say, “Sorry, that’s incorrect.”  My birthday may be October 6, but I had to wait until October 11 of 2015 to get what turned out to be one of the best presents I’ve ever received.

As I mentioned in a previous post, I had uploaded as much family history as I knew to A.J. Jacobs’ Wikitree site, and then had pretty much forgotten about it.  It had been two decades or so since my sister Kathie had uncovered the first paper records giving us some information about my Dad’s history, and over a decade since I had made contact with the foster care agency where my Dad and his younger siblings had been placed.  Genealogists had provided quite a bit more information, but no really meaningful “answers” had been forthcoming, and I frankly felt like none probably ever would.

On October 11, 2015, I received an email forwarded to me through Wikitree’s messaging service which stated the following:

I am related to Kate Tetenbaum via her brother Baruch/ Barnet who was my paternal great grandfather. I have more information than you are showing on this website about Kate, her parents and siblings.

Probably only those of you who have dealt with a family mystery like this can imagine the adrenaline rush I received from getting this message, something that was soon accompanied by a high degree of anxiety since the person sending the message was not a Wikitree member and therefore had to enter contact information herself to get the message to me.  I of course responded to the email address provided, but did not hear back, which led me to believe perhaps she had entered the email address incorrectly (either inadvertently or perhaps on purpose, not wanting to reveal her contact info for whatever reason).  I started madly Googling the name of the person who had contacted me, but could find no one online who seemed to fit (one thing that genealogy research develops is one’s search engine skills).

A couple of days of heavy breathing and intense anticipation were finally met with a response, and it turned out to be rather incredible.  The person contacting me was a genealogist of some achievement, and she had assembled an absolutely incredible history of the Tetenbaums, stretching back hundreds of years, and with an almost picayune amount of information about several of my grandmother Kate’s siblings.  Kind of oddly, her research had never turned up Sarah Crangle, who ironically was one of the first siblings we had discovered due to her having been buried “next door” to my grandmother.

This influx of new information was stunning, and it finally provided one thing we had been aching to see for years:  pictures of my Dad’s family.  Baruch turned out to be a kind of transgenerational “separated at birth” twin of my Uncle Charlie, as can be seen in the above photograph.  As incredible as this information was, it paled in comparison to the next genealogical shoe which was about to drop.

(Note:  I’ve discovered as I’ve met more and more relatives that not everyone is comfortable with names and other data being shared online, so I’m not going to overtly “out” relatives who contacted me, or whom I ended up meeting, either virtually or in person, unless I’ve received prior permission to do so.  If any of them reads this blog and wants to ID themselves in a comment, I’ll happily publish that, but I leave it to each individual’s discretion to do so.)