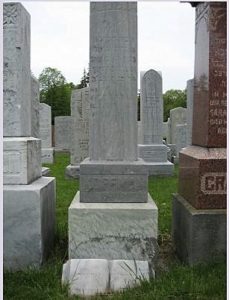 Due to the vagaries of the intersections between solar and lunar calendars, 2016 finds Christmas Eve sharing “religious duties” with the first night of Chanukkah, something that appeals to my multicultural sensibilities for reasons this blog may have already made clear.  It’s a reflective time of year no matter what your particular metaphysical proclivities might be, and as I personally reflect back on some pretty epochal events of 2016, the trajectory as well as the unknowability of life looms large in my increasingly addled mind.  One of the things that unraveling my family history has brought home to me repeatedly is the pure serendipity of how things have been revealed over the span of many years, with long fallow periods suddenly interrupted by some pretty stunning revelations.  One of the more interesting ones came courtesy of my genealogist friend Keith Lassner (see my previous posts), who emailed me one day to tell me he felt certain he had found my grandmother Kate’s grave in Toronto, courtesy of the incredible JewishGen database.

This was both an exciting but also a somewhat befuddling development, for (as I’ve posted previously) we had assumed that Kate had died in Rutland, Vermont giving birth to Sylvia.  When we got the foster care records and discovered Kate had died giving birth to a baby named Catherine, we still weren’t aware Kate had passed in Toronto.  Keith’s previous “spidey sense” that Kate and a woman named Sarah Crangle were sisters turned out to have even more evidence when the JewishGen database showed they were buried next to each other (years later I would discover there’s a little stone “book” at the foot of Kate’s grave which states “two sisters” in Hebrew).  When we started digging through ancillary records, it looked like one of Sarah’s children had been married in between the time of Sarah’s death and Kate’s death, and I wondered if perhaps Kate had traveled to Toronto to help with that event after the death of her (much) older sister.  (It was a fine hypothesis, but an incorrect one, as subsequent revelations proved.)

So, some 10-15 years after my sister Kathie had first uncovered paper documentation on my Dad’s family, we had a number of wonderful new data bits to chew on, but still a lot of unanswered questions.  A bestselling author named A.J. Jacobs provided the mechanism for the next interruption of serendipity, which occurred another couple of years down the line.