The photo above looks like any informal gathering at a local watering hole, but it represents several decades of genealogical research and serves as a potent indicator of just how linked we’ve all become in the age of the internet.  That graying guy in the Levi’s is yours truly, surrounded by descendants of three of my grandmother Kate’s siblings, her brother Baruch (Barnet), and her sisters Annie and Sarah.  Front and center (left) is our “new” first cousin Gail, the daughter of Dolly, as stunned to find out about us as we were to find out about her.  Meeting all of these incredible people (I have to say the Tetenbaums have pretty much taken over the world from my perspective) finally kinda sorta answered some lingering questions we had long had about what exactly went down circa 1922 with regard to my grandmother, grandfather and my father and his siblings.

One of the things that Kathie and I noticed when we first started to accrue data on my Dad’s family was how he and all of his siblings had been born in August.  When it became more or less apparent that our paternal grandfather Jacob had been a traveling salesman, I joked that he obviously returned once a year in November or thereabouts, promptly got Kate pregnant, and then took off again.  That turned out to be not far off from the truth, at least as evidenced by family lore that was shared with us in Toronto (where this family reunion took place).  It was actually disclosed that Kate had been warned not to get pregnant again after the birth of Sylvia in 1920, as she was evidently a fragile woman to begin with.  When she ended up pregnant circa 1921-22, with four young children under the age of 7 to care for, and with Jacob out on one of his sales expeditions, sister Annie evidently invited her to come from Rutland, Vermont to Toronto, as Annie offered to help care for the kids during the pregnancy.  That at least explained how Kate had ended up in Canada.

It also turned out that Dolly had been born prematurely, which made sense due to her June 1922 birthdate.  Kate on her deathbed asked (begged?) Annie to take care of the baby, who was so small that she was quickly bestowed with the nickname Dolly.  Annie raised Dolly and remained a maternal figure for the extended family.  Though there are certain unanswered questions to this day, it appears there may have been bad blood between Annie and Jacob (perhaps because he had gotten Kate pregnant again against doctor’s orders), and potentially for that reason Jacob decided (traumatically, I might add) not to leave the young Kauffman children with family in Toronto, taking them instead to New York City where he dropped them off at the Hebrew Sheltering Guardian Society.  The fact that he told the HSGS that baby Catherine had been put up for adoption, and that the only family he mentioned on the intake documents were the far off Fishkins in England also seems to indicate he was trying to cover his tracks for some reason.  This remains one of the as yet “unsolved mysteries” of the Kauffman story.

We still aren’t sure what happened to Jacob and eldest brother Hyman.  They more or less disappear circa 1924 or so.  The foster care records mention they were in Cuba at some point, and Kathie and I are exploring that possibility (I am certainly not adverse to going there for a few cigars, rum and fantastic music).  The trip to Toronto was a whirlwind of emotions, probably none stronger for me than the day we visited the Dawes Road cemetery and I was able to recite Kaddish over my grandmother’s grave.  Those of you who know me know I’m an artistic type, and my Dad’s mantra to me as I grew up was that I had to learn to control my emotions, something that has always been a challenge for me, but I’m not ashamed to say I was overcome with both sadness and relief that drizzly day at Dawes Road.

I want to close this particular “chapter” of our tale by offering pics of the Kauffman kids, reuniting them virtually if not in actuality.  The first picture must have been taken in the 1930s or 1940s, before Sylvia’s death (the man next to her on her left is her husband).  You’ll note the amazing family resemblance between Dolly, Sylvia and Charlie. 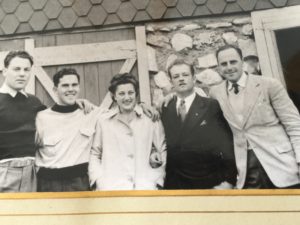 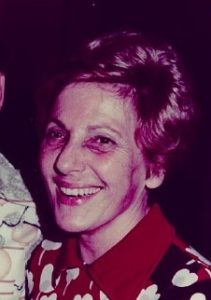